This post will outline an extremely simple yet effective Release Pipeline model you can use in your PowerShell projects. This process is essentially a distillation of the whitepaper written by Michael Greene from Microsoft and Steven Muraski from Chef using PowerShell based tools. I highly recommend you read the whitepaper which you can grab at http://aka.ms/thereleasepipelinemodel. The whitepaper gives an excellent overview of the Release Pipeline Model (Source, Build, Test, and Release) and how this simple and easy to understand model can be applied to IT Operations.

STOP!!!
GO READ THE WHITEPAPER BEFORE CONTINUING!!!
CLICK ME

Now that you’ve digested that, here is a quick overview of the various components.

All configuration for a given system and any scripts running in your environment will be stored in Source Control. This is the single source of truth for your environment and ALL configuration, policy, tests, and deployment scripts are stored here as versionable documents. All artifacts will be produced from documents you keep under Source Control.

A build system is an orchestration service that is is connected to the source control platform so that action can be triggered when files change in the source repository. The build server will be responsible for running the build script defined in source control. This build script will perform all the necessary tasks the must occur before a change can be released into production.

Once changes are submitted to source control, the build system will orchestrate the process of running various tests on the code to check for style (linting) and static code analysis (PowerShell Script Analyzer). Unit, Integration, and Acceptance tests can be performed with tools like Pester.

Once the code or configuration changes have passed all tests defined in the Test stage, the code (or artifacts produced from the code) will be released to the outside world. What Released means to you may vary greatly from project to project. In one project it may mean copying the tested script to a remote server so a scheduled task can execute it while in another project it may mean building an Azure VM via an ARM template. Perhaps in another project in may mean deploying a new VM, installing Chef, applying an application via a cookbook, restoring data from a known good backup and cutting over to the new VM in a blue/green deployment scenario. The point is that what is Released in your environment has been thoroughly tested and you know the impact the change will have in your environment before you actually make the change.

Tools we can use with this model

Let’s say we have a PowerShell script in use in our production environment. It doesn’t really matter what the script does, but for this example, let’s say our script is called ServerInfo.ps1. This script will grab some system information from a computer via Get-CimInstance and return it back to us. We want to start using the Release Pipeline model for source control, development, testing, and ongoing releases of the script.

We need to get this script into source control. Let’s make our folder a source control repository for the script and all associated tests and deployment configuration. This repository is the single source of truth about the script, how it is tested, how it is deployed, and any related documentation.

This is what our folder looks like at this point.

Now that we have git and posh-git installed, let’s make this folder a repository.

Notice that our prompt has changed. This is posh-git showing us that this folder is now a git repository and we already have something to check in.

Create a file called ServerInfo.tests.ps1 in the repository and save it with the following contents.

This is a pretty weak test script but that is OK. I’m just describing the process flow. Your set of tests will be much more comprehensive. You can read more about Pester here.

We want our entry point into calling various parts of the pipeline to be simple. To do this, we’ll create a small script called build.ps1. Copy the following contents to the script.

This build script is only meant as an entry point into calling psakeBuild.ps1 with an optional task to run. We are also assigning the default psake task to run to Default. This ensures that just running build.ps1 with no arguments will only execute our psake tasks invoked in testing. You will see that in our psakeBuild.ps1 script below. Your default task should be benign to avoid any unintended actions being taken by calling build.ps1 with no explicit task.

The psake script psakeBuild.ps1 is where all the logic for the various tasks over the lifecyle of your script will be defined. Copy the following contents to the script. There is a simple DSL for psake scripts which you can find more about here.

You’ll notice we have defined tasks inside psakeBuild.ps1

You can get as detailed as you need to with your psake tasks. You will likely create many more that map to the various operations regarding the lifecycle of the repository. This in important as the primary way you interact with the repository going forward is to call build.ps1 with the appropriate task name you would like to perform.

Your PSDeploy script is the way you distribute your script to the outside world once it has passed all relevant testing initiated from your psake script. Create a new script called ServerInfo.psdeploy.ps1 and copy the following contents into it. PSDeploy scripts use a simple DSL which you can find more about here. The PSDeploy script below will just be copying our ServerInfo.ps1 script to c:\temp. Not very useful I know, but imagine if you wanted to deploy the script to 1000 machines. It’s just a matter of passing an array of destination shares in the To section. PSDeploy will take care of deploying the code to all 1000 endpoints for you.

At the time of writing this post, PSDeploy supports the following deployment types:

Why create a README.md file? Your repository is starting to accumulate a handful of scripts and your colleges or future self will thank you that you have taken the time to document what the purpose of this repository is and how to interact with it. The README.md is the perfect place for that type of information.

Now that we’ve created all the necessary objects in our repository, it should look similar to this:

Now we’re going to test out the various operations we can perform with build.ps1. Because we’ve haven’t wired up this repository to a true build server like TFS or Jenkins, we’re going to simulate that by manually executing our build.ps1 script. In a true Release Pipeline using Continuous Integration, your build server would be responsible for executing the appropriate build task when you check in your code into your control system.

Looking at our psakeBuild.ps1 script above. We’ve defined the following tasks:

Now let’s manually run the Test task that will invoke our Pester tests. 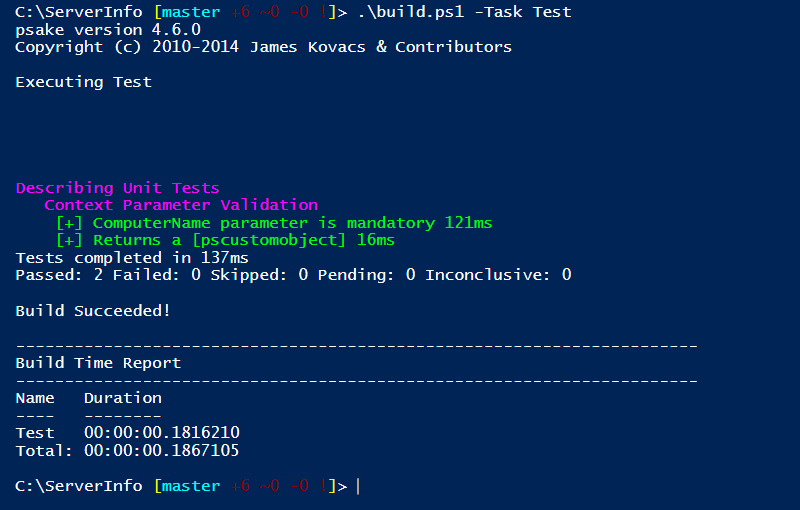 Our Default task has dependencies on the Analyze and Test tasks completing successfully. Let’s kick off the default task to make sure that happens. 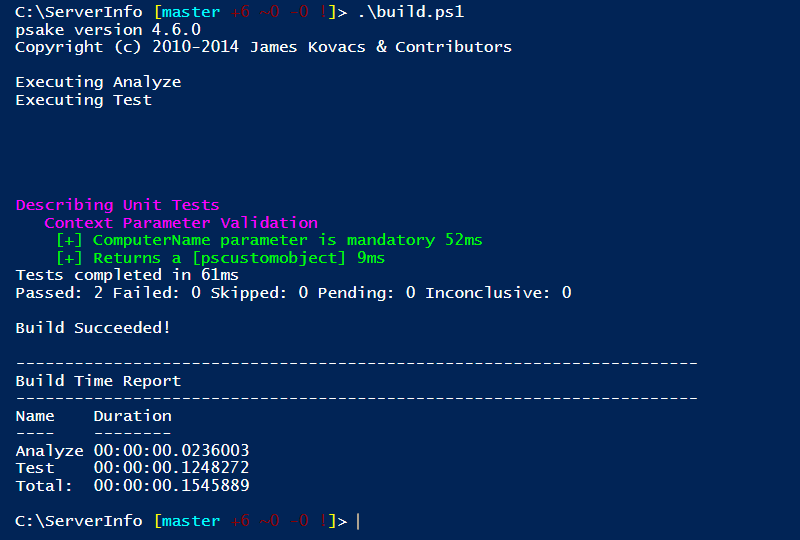 The Deploy task also has dependencies on the Analyze and Test tasks completing before any code in the task in executed. This ensures that only code that has passed our quality checks (such as they are) can be deployed. Let’s run our Deploy task and make sure that ServerInfo.ps1 gets tested and our PSDeploy script is executed. I’m calling the build script with -Verbose so the PSDeploy output is shown. 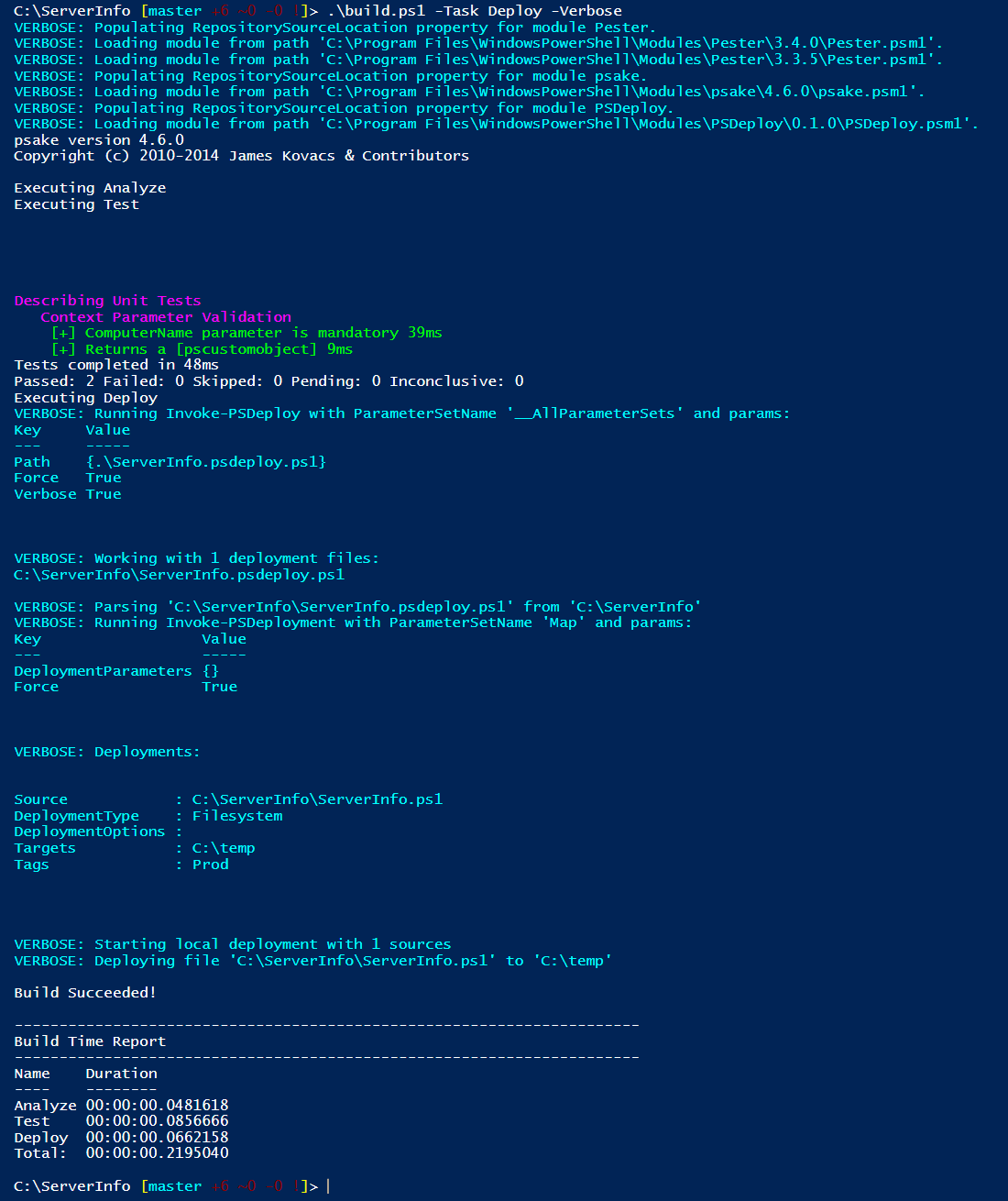 Our deploy worked on the first try! I don’t know about you, but I rarely get anything right on the first try. Let’s go back to our ServerInfo.ps1 script and put some bad code in and re-run our build process. This error should be caught in our Pester or Script Analyzer tests and trigger a failing build.

Put this code in ServerInfo.ps1

Execute the Deploy task and see if we catch the error. 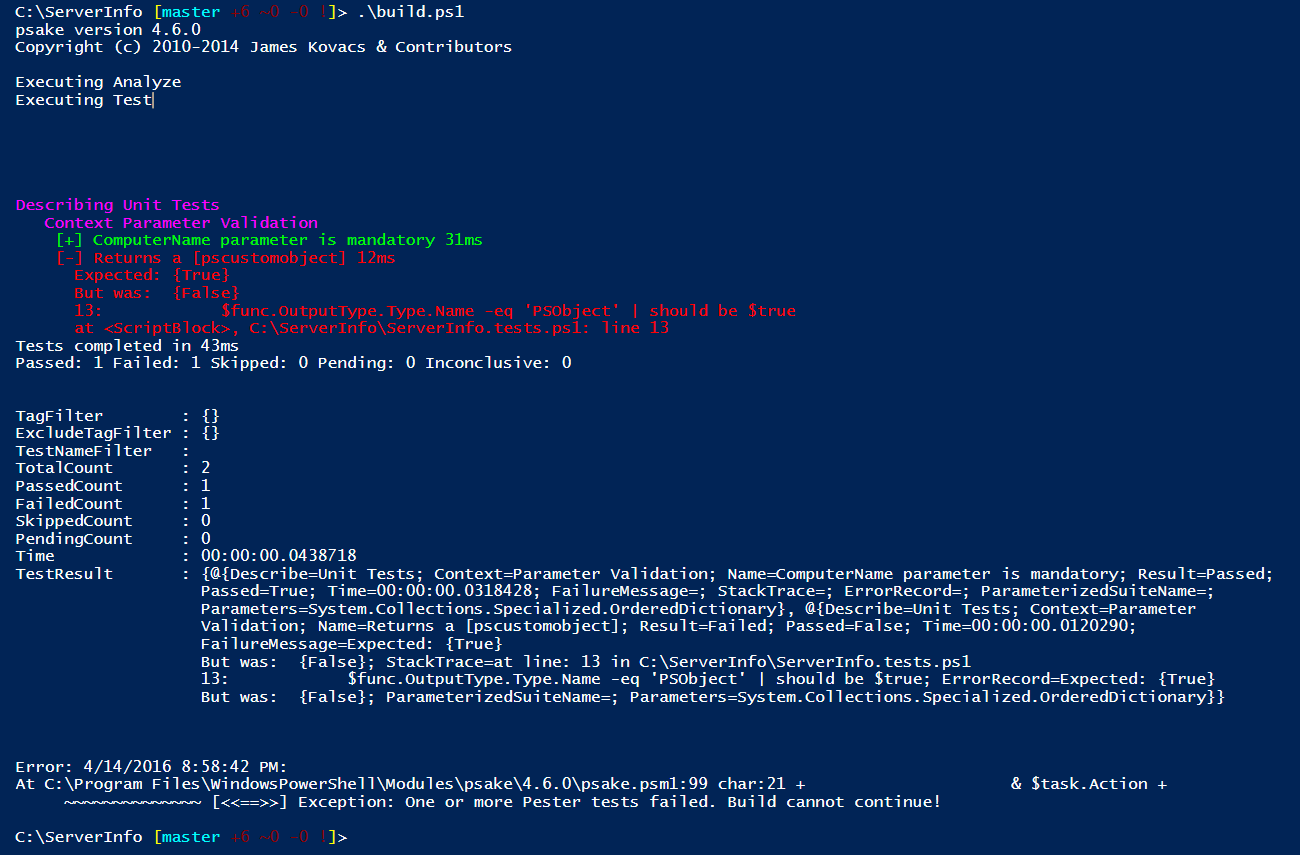 Notice that our Deploy task has failed on its’ dependencies and will NOT execute the deploy task. This just saved us from deploying bad code into production.

As you further development your script and write Pester tests to test the script operates as you expect, you can now be confident that what you release into production will behave as you expect it to. Putting guard rails into your process in the form of automated tests and build procedures that require passing tests in order to proceed to the next stage will put you onto the happy path to releasing quality code at a faster pace.

The code in this post is also available on GitHub if you want to start with a working example for your projects.

There you have it. You now have a Release Pipeline implemented in pure PowerShell. I hope you found this post helpful and has given you some ideas on implementing this method in your environment.